NBA returns: LeBron, Giannis and the players to watch via STATS facts 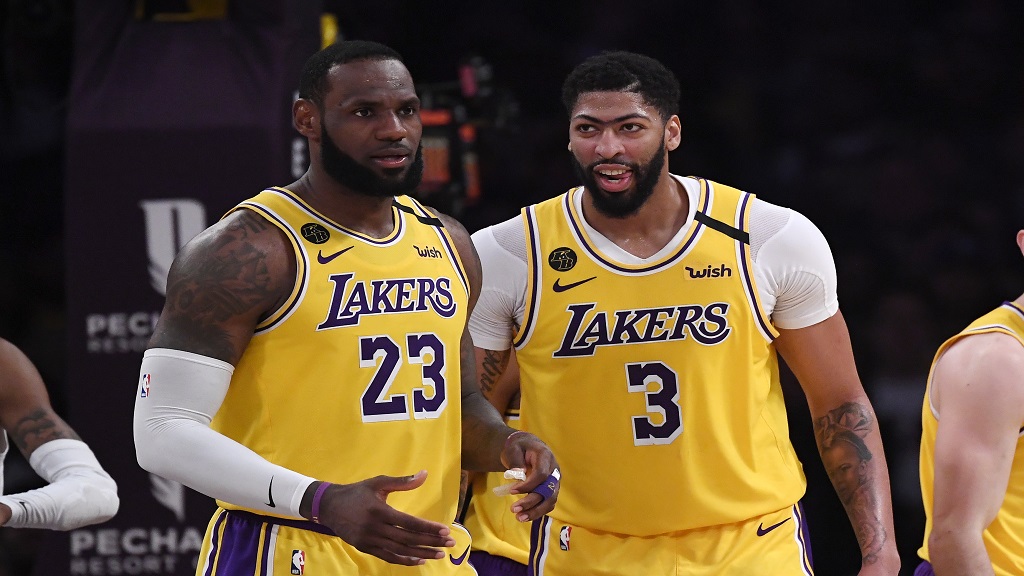 In this Feb. 21, 2020, file photo, Los Angeles Lakers forward LeBron James, left, stands with forward Anthony Davis during the second half of an NBA basketball game against the Memphis Grizzlies in Los Angeles. James and Davis had the Lakers on course to contend for another NBA title before the coronavirus pandemic upended their first season together. AP Photo/Mark J. Terrill, File).

The NBA finally returns on Thursday and it's been a long-time coming.

Not since March 11 have players taken to the court and fans watched official games due to the coronavirus pandemic.

But, after months of waiting, the New Orleans Pelicans-Utah Jazz and Los Angeles Lakers-Los Angeles Clippers clashes will headline the 2019-20 season restart in Orlando, Florida.

Inside the Walt Disney World Resort bubble, 22 teams will resume their regular seasons before the playoffs.

The Milwaukee Bucks topped the NBA standings at the time of the postponement, while the Los Angeles Lakers were flying in the Western Conference.

Using STATS data, we look at the best-performing players prior to the hiatus as LeBron James eyes a fourth championship ring and Bucks star Giannis Antetokounmpo chases a maiden title.

After a tough first season in Los Angeles, James has returned to his brilliant best in 2019-20. Before the coronavirus-enforced break, the four-time MVP catapulted himself into the mix for a fifth Most Valuable Player honour by leading the Lakers – who have played 63 of their 82-game regular season – to a Western Conference-best 49-14 record.

As the 35-year-old superstar prepares to resume his bid for another NBA crown, James leads the league in assists per game with 10.6. If he maintains his pace, James would be the third-oldest player to lead the NBA in assists per game behind two-time MVP and Phoenix Suns great Steve Nash – who did so in both 2009-10 (age 35-36) and 2010-11 (age 36-37). The former Miami Heat and Cleveland Cavaliers forward has also been averaging 25.7 points and 7.9 rebounds per game this season.

James, whose maiden campaign at Staples Center was cut short by a Christmas Day injury almost two years ago, was playing some of his best basketball alongside All-Star recruit Anthony Davis before the March suspension. In five games that month, James averaged 30.0 points and 10.6 assists per game, while shooting 55.7 per cent from the field. It is the only time in the last 30 years that any NBA player has averaged 30.0-plus points and 10.0-plus assists on 55.0-plus per cent shooting in a calendar month (minimum five games played).

The Eastern Conference-leading Bucks (53-12) are on track for their first NBA title since 1971 thanks to superstar MVP Antetokounmpo after Mike Budenholzer's side lost in the Conference Finals last season.

Antetokounmpo – expected to go close to winning back-to-back MVPs – has not taken a backward step since being crowned the league's best in 2018-19, averaging 29.6 points, 13.7 rebounds and 5.8 assists per game for the high-flying Bucks this season.

James Harden's standing among the greats is often debated but there is no doubting his quality and importance to the Houston Rockets.

Harden has established himself as a scoring machine in Houston since joining the Rockets from the Oklahoma City Thunder in 2012, especially from beyond the arc, and after averaging 36.1 points last season, the 2018 MVP is at it again.

The Rockets – sixth in the west with a 40-24 record – are relying heavily on Harden to lead the two-time champions to their first NBA Finals appearance since 1995.

The reigning Rookie of the Year continues to take the NBA by storm, elevating the Mavericks (40-27) into a legitimate playoff threat after Dallas missed the postseason for a third consecutive year last term.

The 21-year-old Slovenian sensation – who is forming a formidable combination with fellow international star Kristaps Porzingis – is looking to join Oscar Robertson (five times), Jordan (1988-89), Harden (2016-17) and Westbrook (2016-17) as the only players to average 28/8/8 in a season.

When it comes to number one draft pick Zion Williamson, believe the hype.

The Pelicans rookie has not missed a beat since debuting in January, quickly making his presence known around the NBA competition.

Likened to James during his college days with Duke, Williamson has averaged 23.6 points per game in his first 19 games – the most by any player through 19 career games since Chicago Bulls and NBA legend Jordan (25.6).

Williamson has helped fill the void left by Davis in New Orleans and the Pelicans – 10th in the Western Conference with a 28-36 record – will be hoping the 20-year-old can lead the organisation to just their second playoff appearance in five seasons.

Keep an eye on Nets' LeVert

The Nets will be far from full strength in the NBA bubble. Superstars Kyrie Irving and Kevin Durant are both sidelined through injury, while DeAndre Jordan, Spencer Dinwiddie, Wilson Chandler and Taurean Prince have opted out.

LeVert has been much improved since re-joining the starting line-up with the playoff-chasing Nets. In his first 14 games off the bench, he was only averaging 11.1 points, 2.7 assists and 2.6 rebounds as Brooklyn went 5-9.

Since returning to the starting five, the 25-year-old is averaging 24.1 points, 5.3 assists and 4.8 rebounds through his last 16 games. More importantly, the Nets (30-34) boasted a 9-7 record to be seventh in a congested Eastern Conference.