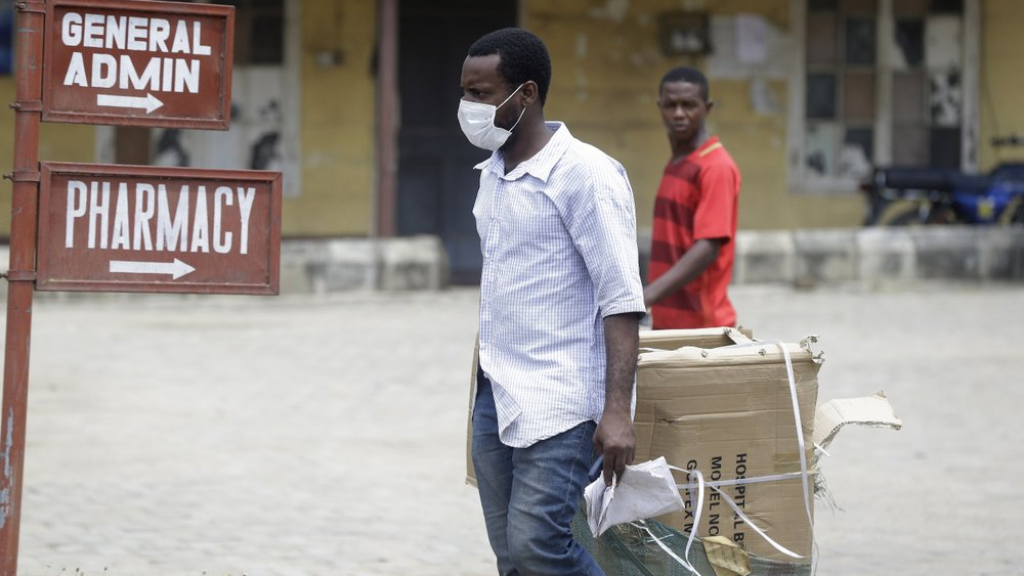 A man wearing face mask walks at the Yaba Mainland hospital were the first Nigerian victims of the COVID-19 virus are being treated in Lagos Nigeria Friday, Feb. 28, 2020. Nigeria's health authorities have reported the country's first case of a new coronavirus in Lagos, the first confirmed appearance of the disease in sub-Saharan Africa. (Photo/ Sunday Alamba)

Nigerian authorities on Friday reported the first confirmed case of the new coronavirus in sub-Saharan Africa as the outbreak spread to a region with some of the world's weakest health systems.

The health commissioner for Lagos, Africa's largest city with more than 20 million people, said an Italian citizen who entered Nigeria on Tuesday from Milan on a business trip fell ill the next day. Commissioner Akin Abayomi said the man was clinically stable with no serious symptoms.

Abayomi said officials were working to identify all of the man's contacts since he arrived in Nigeria. Lagos state early this month advised people arriving from virus-affected areas to observe 14 days of self-quarantine while monitoring for any symptoms.

Nigerian health officials have been strengthening measures to ensure that any outbreak in Lagos is contained quickly, Abayomi said in a statement. He urged Lagos residents to take measures such as keeping their distance from people who are coughing and washing their hands regularly.

Cases of the virus were confirmed in Egypt and Algeria in north Africa in recent days. Until then, some global health experts had expressed surprise that no cases had been reported in Africa.

It was concerns about the virus spreading to countries with weaker health systems that led the World Health Organization to declare the outbreak a global health emergency.

Nigeria is one of 13 African countries that WHO classified as high priority in this outbreak because of direct links to China or a high number of visitors from there.

That Nigeria's first case came from overseas and wasn't person-to-person transmission inside Africa "shows that the Nigerian government had the right systems in place to detect and confirm this case," Trudie Lang, director of The Global Health Network at the Nuffield Department of Medicine and the University of Oxford said in a statement.

But detection of further cases in Africa will be challenging as more inexpensive testing kits are needed for on-the-spot diagnosis, Lang added.

The Africa Centers for Disease Control and Prevention has hurried to train its 54 member countries in testing for the virus. Just two countries had the capability at the beginning of this month. Now more than two dozen have it, including Nigeria.

Most African airlines with direct flights to China quickly suspended them, and countries activated surveillance and quarantine measures.

Many had experience with trying to prevent the spread of the devastating West Africa Ebola outbreak that ended in 2016, and global health experts now point to that as a sign of preparedness in this outbreak. The Africa CDC was created in response to the Ebola outbreak, and many countries established public health institutes.

Nigeria was praised for quickly containing cases when the Ebola outbreak reached there in 2014 after an infected man from Liberia landed in Lagos. Nineteen people were infected and seven died, but officials were praised for effective public awareness campaigns and strong leadership.

"We have worked very hard to strengthen our systems in preparedness for this outbreak," the director of the Nigeria Center for Disease Control, Chikwe Ihekweazu, tweeted.

"The Ebola outbreak taught us a lot of lessons," Ihekweazu wrote in a commentary for The Conversation last month. As of December, all 36 of Nigeria's states had a rapid response team in case of a disease outbreak, he wrote, and 22 states had emergency operations centers to better coordinate a response.

Nigeria is also currently dealing with an outbreak of Lassa fever — an indication of the health challenges that many African nations face.

With the new virus case announced in Nigeria, Africa's most populous country with 190 million people and numerous air links around the continent and beyond, other nations warned of possible spread.

"Given these recent developments globally and in Africa, it is not unlikely that we will have importation of COVID-19 to South Africa," that country's National Institute for Communicable Diseases said Friday.

Separately, South Africa said two citizens who had been working on the Princess Diamond cruise ship have the virus and will stay in Japan for treatment. South Africa said it was informed by Japanese authorities on Tuesday after the quarantine on the ship had ended. The two were among 12 South Africans on the crew.

In a separate statement Thursday night, South Africa said it planned to evacuate more than 130 citizens from China's Wuhan city where the outbreak began. It did not say when that would happen.

This is the first major country in sub-Saharan Africa to evacuate its citizens, while thousands of African students remain stranded and several governments say it's safer to stay in place and not risk spreading the virus back home.