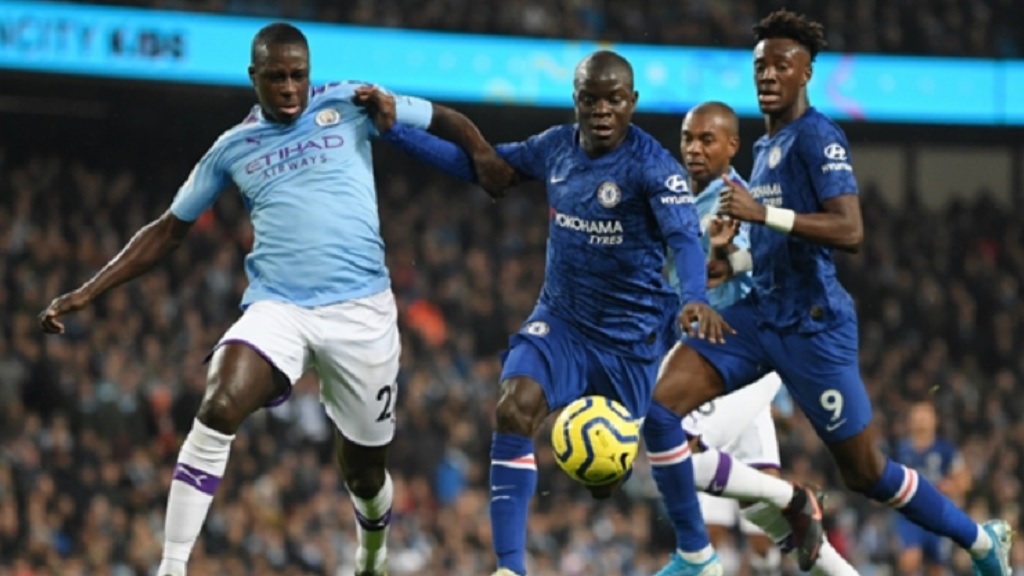 Manchester City in action against Chelsea.

As the world continues to battle against the coronavirus pandemic, football fans across the globe face another weekend scratching around for something to fill the void.

The domestic calendar in England was halted last week in a bid to reduce social gatherings and the Football Association confirmed its leagues would not return until at least the end of April.

While we cannot say for sure how this weekend's Premier League fixtures would have gone, our friends at Opta have come up with a system to predict the outcomes.

What chance would your team have had? Take a look below.

The Opta Predictor estimates the probability of each match outcome (win, draw or loss) given each team's attacking and defensive quality. The team's attacking and defensive qualities are based on four years of historic results, with more weighting given to their most recent results. The model will take into account the quality of the opposition that a team scores or concedes against and reward them accordingly.

Watford may have handed Liverpool their first defeat of the Premier League season, but with just one victory in their past three visits to Turf Moor it is Burnley who are expected to win by the predictor. Sean Dyche's side has gone unbeaten in seven top-flight matches to move into a more comfortable position in the middle of the table.

Manchester City are the pick to prevail at Stamford Bridge, a ground where Pep Guardiola has lost on two of his three Premier League visits. Kevin De Bruyne's winner in September 2017 fired City's charge to a 100-point title romp but goals from N'Golo Kante and David Luiz saw the Blues hand Guardiola's men the first league defeat of their triumphant 2018-19 campaign. Kante and De Bruyne were both on target when the sides met at the Etihad Stadium back in November before Riyad Mahrez sealed a 2-1 comeback win for the hosts.

Brighton won at Arsenal back in December, but that was just one of two away victories for the Seagulls so far in the Premier League this season, so their prospects at Leicester were inevitably looking bleak. After a worrying slump, Leicester looked to have rediscovered their mojo by the time the league ground to a halt, with Jamie Vardy back on the goal trail following a drought. Leicester’s nine wins at the King Power Stadium this term looked highly likely to become 10.

A predicted triumph for Liverpool at Anfield is by no means a surprise given they are on a top-flight record of 22 straight home wins. With just an eight per cent chance of winning, Palace had the lowest chance of victory in this round of fixtures. However, with City predicted to come out on top against Chelsea, the Reds' wait to clinch the Premier League title would have continued.

The halt in football action came at a bad time for Manchester United, who were on a magnificent roll - 11 matches unbeaten with eight victories. The Opta predictor backed the hosts to continue that run, but at 48 per cent, a home win was seen as far from a certainty. Amid an amazing season, Sheffield United are just two points behind Ole Gunnar Solskjaer's men and at 30 per cent, it is the most likely contest on the matchday to end in a draw. That was also the outcome in a thrilling 3-3 draw at Bramall Lane in November.

The predicted win for Newcastle is something Aston Villa – second from bottom and 10 points shy of Steve Bruce's men – could ill afford in reality. Newcastle are unbeaten in five matches at St James' Park, although that run includes three consecutive 0-0 draws. Villa have lost four in succession in the Premier League and only won three times in the top flight since beating the Magpies 2-0 in the corresponding fixture on November 25.

Norwich prop up the Premier League table and the predictor reflects as such, with Everton having a greater chance of victory on the road. The Toffees' last win at Carrow Road came in 2004, though, and Everton were beaten 2-0 at home by Daniel Farke's side back in November, Todd Cantwell and Dennis Srbeny with the goals at Goodison Park.

Southampton’s resurgence during December and January had given way to a worrying patch of form over February and early March. Ralph Hasenhuttl's men did beat Aston Villa at home, but this Arsenal side under Mikel Arteta’s leadership is a different prospect to the team Saints held 2-2 in north London back in November. The Gunners are unbeaten in the Premier League in 2020, and they would have fancied claiming all three points on offer at St Mary's.

The Hammers were not predicted to fare particularly well at the Tottenham Hotspur Stadium, but they did defy the odds with a 1-0 win at the same venue in April 2019, Michail Antonio scoring the winner. Tottenham were the victors in the reverse fixture this season, a 3-2 triumph in Jose Mourinho's first match in charge.

Wolves are unbeaten in all three of their Premier League matches against Bournemouth, including a 2-1 win in the reverse fixture, and the predictor has them as the more likely winners on this matchday. That would come as a welcome relief to Wolves, who have won just one of their last five home top-flight matches, while Eddie Howe's men would be primed for a seventh consecutive away loss.

You cannot just give Liverpool the title, says John Barnes

‘Lean On Me,’ ‘Lovely Day’ singer Bill Withers dies at 81