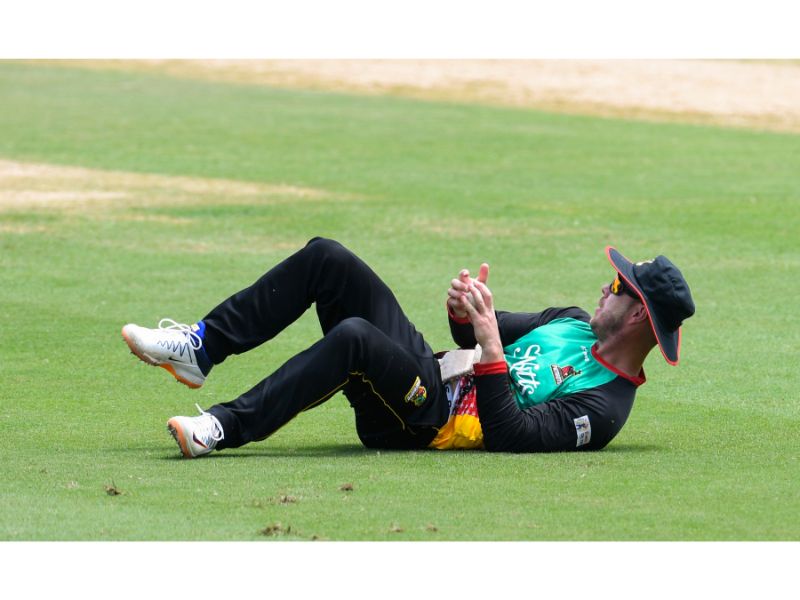 Lendl Simmons inspired the Trinbago Knight Riders to a dominant 59-run win over the St Kitts and Nevis Patriots on Wednesday to complete their 8th win in a row in the 2020 Hero Caribbean Premier League.

The explosive right-hander returned to form with 96 off 63 balls and featured in a 130-run partnership with Darren Bravo (36) to pace the Knight Riders to 174/4 in their 20 overs.

Great early bowling by Akeal Hosein (1/15), Khary Pierre (1/28), backed-up by Indian leg-spinner Pravin Tambe (1/12), strangled the Patriots effort as they fell to their seventh defeat in the 2020 tournament.

Sikandar Raza claimed 3/16 off his three overs as the Patriots limped to 115/7 in their 20 overs.

The Patriots paired Sheldon Cottrell and Alzarri Joseph with the new ball, but they leaked boundaries to Simmons and Amir Jangoo.

But Jangoo’s senior T20 debut was cut short by an excellent pick-up and throw off his own bowling by Cottrell to run him out.

Joseph hit Colin Munro on the hand, and when play resumed after a short shower Munro was unable to continue.

Simmons took 11 off Rayad Emrit including a Hero Maximum, and then lofted Jon-Russ Jaggesar over midwicket. He followed up with a cut for four, and the Knight Riders were well set at 52/1 off the Powerplay.

At halfway the Knight Riders had only progressed to 68/1. Simmons and Darren Bravo managed only singles off Emrit.

Joseph hit Darren Bravo in the head, but all was well, and Bravo ended a 35 ball streak without a boundary with a pull for four.

Simmons too broke free, pulling Emrit for another Hero Maximum, before bringing up 50 off 42 balls with a single.

Emrit went to Cottrell, but he went for 17 as Darren Bravo lofted a Hero Maximum and Simmons picked up two fours.

After 15 overs, the Knight Riders were 125/1. Darren Bravo also hit Drakes for six, bringing up the 100 partnership off just 66 balls.

Simmons pulled another Hero Maximum and Bravo creamed a four through extra-cover, making the 16th over another productive one.

Emrit went for just four off his last, and Joseph started the 18th well, but Simmons bludgeoned two Hero Maximums to take himself into the 90s and the Knight Riders past 150.

A Patriots bowler finally got a wicket, Cottrell getting Darren Bravo strangled down the leg-side in a good 19th over that went for just 3.

Drakes got two wickets in two balls, as Simmons pulled to Cottrell to fall short of a century and Tim Seifert leading-edged and was well caught by Lynn.

Raza survived the hat-trick ball, and stand-in captain DJ Bravo smashed the last ball of the innings for a Hero Maximum.

Akeal Hosein and Khary Pierre took the new ball for the Knight Riders, and the latter picked up the dangerous Lewis, Tambe, belying his 48 years, took an athletic catch.

Lynn and Joshua da Silva broke free off Pierre, each hitting a Hero Maximum with Da Silva also sweeping for four, but even an over of 18 only took the Patriots to 34/1 after six.

Tambe and Anderson Phillip put the squeeze back on, with only one boundary between the Powerplay and drinks, and at halfway the Patriots needed almost 12 an over.

A Tambe maiden pushed that above 13, and with Da Silva going at barely a run a ball and Lynn going at well under four an over there had to be an acceleration soon.

It didn’t come off DJ Bravo, and while Da Silva drove Tambe for four, he was deceived by the Indian leg-spinner and drove a catch back to the bowler.

At the end of Tambe’s outstanding spell, the Patriots were 67/2 off 13 and needed well over 15 an over. Lynn climbed into a DJ Bravo full toss, but then sliced high in the air and was well caught by Raza to end a disappointing innings.

Ben Dunk smashed Raza’s first ball for four but off his second got a reverse sweep all wrong and popped up a simple catch to Seifert.

With five overs left, Drakes and Ramdin were staring at a required run rate of 18.

That figure jumped above 20 as Pierre’s last over went for just seven, and Ramdin could only find midwicket when he tried to take on Raza.

Raza did the work himself to pick up his third, taking a good diving caught-and-bowled as Drakes toe-ended an attempted straight hit.

After 17, Raza had figures of 3/8 and the Patriots needed 27 an over. Hosein picked up a deserved wicket late in his spell, getting Joseph stumped with one flung wide of off-stump.

He celebrated by running to hug his childhood friend Khary Pierre. Imran found himself with three slips for company as Hosein finished off the 18th over, and the game was now officially unwinnable.

Emrit added to the Hero Maximum charity fund off Phillip’s 20th, but the Patriots didn't come close to winning this one, and the Knight Riders had made it eight wins from eight without breaking sweat.