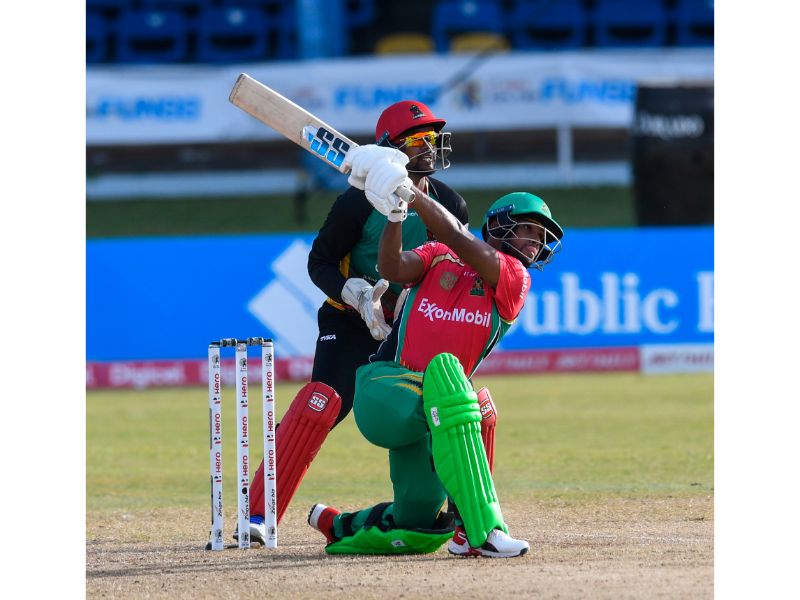 Guyana Amazon Warriors batsman NIcholas Pooran hits another six, as St Kitts and Patriots keeper Denesh Ramdin looks on, during his innings of 100* not out at the Queen's Park Oval on Sunday in the Hero Caribbean Premier League. (Photo by Randy Brooks - CPL T20/Getty Images)

Nicholas Pooran hit the first hundred of the 2020 Hero Caribbean Premier League to lift the Amazon Warriors to third place in the table and ramp on the pressure on the St Kitts and Nevis Patriots.

The Amazon Warriors batsman hit three consecutive sixes to clinch victory and end on 100 not out as Chris Green's men chased down 151 for victory.

The Amazon Warriors were in trouble at 26/3 when Pooran came in but the T&T batsman put on an unbroken 4th wicket partnership of 128 with Ross Taylor (25 not out) to consign the Patriots to their 6th loss in seven matches.

Earlier, the Patriots got to 150 for 5 with Joshua da Silva (59) and Denesh Ramdin (37 not out) being the major contributors.

Amazon Warriors captain Chris Green took 2/31, while Jon-Russ Jagessar had 2/33 for the Patriots as they went down to a seven-wicket loss.

Kevin Sinclair got the second over on his senior T20 debut and went for just a single.

While Evin Lewis took Green for 10 off two balls, he chopped on to become Sinclair’s first career T20 wicket.

Ben Dunk started with an edged four off Green, and Joshua da Silva was busy at the crease.

But three singles were all the two could manage as Sinclair bowled a third in a row, and after the Powerplay the Patriots were 33/2.

Imran Tahir nearly had Da Silva stumped, but a swept four by Dunk saw the over go for 8. Sinclair bowled out in one go, and with 17 dots and no boundaries it was a fine first T20 spell.

Tahir’s second went for just three, and Dunk lost patience against Green and was bowled to leave the Patriots 51/3 at the drinks break.

Ashmead Nedd came on, and off the 25th ball he had faced Da Silva finally found the boundary.

Da Silva found the fence off Nedd again, and when Keemo Paul came on to break a run of 13 straight overs of spin the Patriots were 69/3.

Da Silva attacked Paul, hitting his first two career T20 sixes, the first a loft over the bowler’s head and the second a pull into the stands.

He continued to hit powerfully down the ground, although Nedd dropped a sharp caught-and-bowled chance, and Ramdin joined in with a Hero Maximum over midwicket.

Da Silva drove Tahir, who for once went wicketless, over cover, and off Naveen’s first ball brought up his first T20 half-century off 42 balls.

He used Naveen’s pace to close the 17th over with back to back fours, and with three overs left the Patriots had moved to 118/3.

Romario Shepherd though broke the stand, bowling the impressive Da Silva with an excellent yorker.

Ramdin improvised to hit Paul for six, but Sohail Tanvir was caught napping and Paul ran him out.

Shepherd started and ended the 20th with good yorkers, but in between Nedd didn’t even get a hand on a swirling Ramdin top edge and the Patriots keeper smashed a Hero Maximum to get the Patriots to their highest score of Hero CPL 2020.

Brandon King edged an Alzarri Joseph yorker past the stumps for four, but was fully in control of a cover drive in the same over.

King’s latest opening partner, Sinclair, was scratchy; he was dropped off by Tanvir off his own bowling and was lucky to survive a maiden from Imran Khan.

That put pressure on King who skied a Joseph bouncer to give Ramdin a simple catch.

Sinclair’s dismissal followed soon after, chipping softly back to the bowler Jon-Russ Jaggesar, who followed up with the wicket of Shimron Hetmyer who top-edged a cut to Ramdin.

After the Powerplay, the Amazon Warriors were 26/3 and in need of a partnership between Pooran and Taylor. They got one, and how.

Pooran hit two Hero Maximums over Jaggesar’s head and Taylor pulled a third hard and flat off Emrit, but at halfway the Amazon Warriors still needed over nine an over.

Pooran sensed the urgency, hammering Imran for four then six over the off-side and closing with an enormous six over midwicket to take 18 off the 11th.

Pooran didn’t relent, dismissing Jaggesar over long-off and slicing Joseph behind square to bring up 50 off just 25 balls.

Another four made it 12 off the over, and the Amazon Warriors had surged to 99/3 off 13 and the rate had fallen to under seven-and-a-half.

Ish Sodhi did well to only go for six off his first over, including two byes, and Emrit also went boundary-less.

But Pooran made the equation far easier with a slog-sweep clean over the fence, his sixth Hero Maximum, as Sodhi’s second over went for 11.

Emrit called for Tanvir, but Pooran launched him over his head for a Hero Maximum to bring up the first hundred partnership by any team in Hero CPL 2020 and followed up with a fierce pull for four to leave the Amazon Warriors needing 16 off the last 18 balls.

Fittingly, Pooran sealed victory with 15 balls to spare and reached his century by hammering three sixes in a row off Sodhi.

The Patriots’ batting showed promise, but it looks a struggle now for them to make the semi-finals.