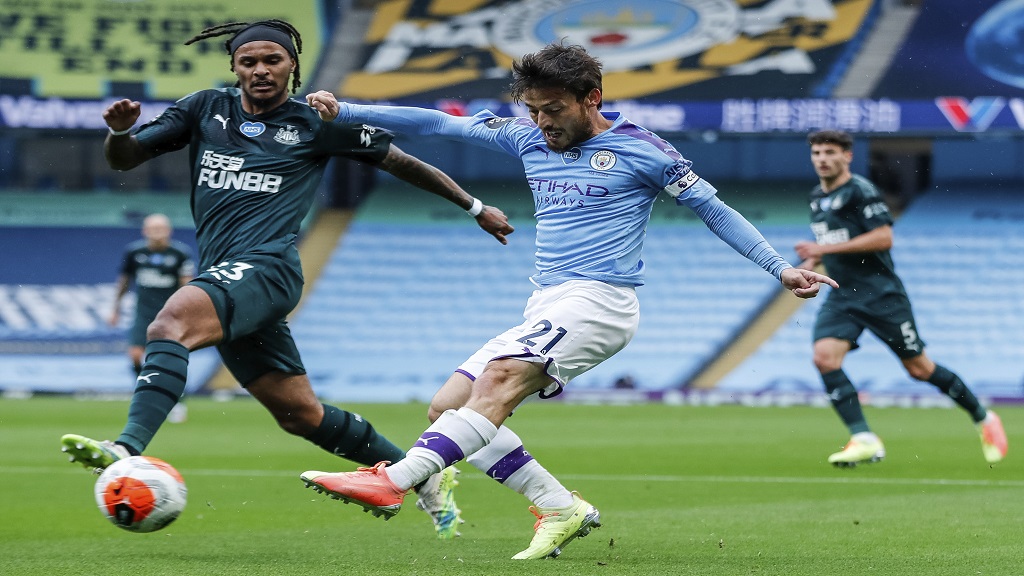 David Silva gave a reminder of what Manchester City will be missing when he leaves at the end of the season by scoring a free-kick and setting up two other goals in a 5-0 win over Newcastle in the English Premier League on Wednesday.

The 34-year-old Spanish playmaker, who is departing after 10 years at City, starred in the deposed champions' latest big home win since the restart of the league and provided the highlight by curling a free-kick into the top corner in the 65th for the fourth goal.

Gabriel Jesus and Riyad Mahrez scored in the opening 21 minutes, while an own-goal by Newcastle defender Federico Fernández made it 3-0. Raheem Sterling wrapped up an easy win with the fifth goal in stoppage time.

The necessity for stadiums to be empty because of the coronavirus pandemic has denied City fans the chance to give a send-off for Silva at the end of his last season.

He is no longer the Silva of old — he struggles to cope with the intensity of top-level matches — but in lopsided games such as this against Newcastle, the former Spain international still can look a class apart.

It was Silva who set up Jesus with a low cross from the left in the 10th minute for the Brazil striker's first goal since scoring against Real Madrid in the Champions League on February 26. It should improve the confidence of the striker, who has missed a slew of chances since starting regularly in the absence of the injured Sergio Aguero.

Mahrez swept home a finish from a similar position after a cut-back from Kevin De Bruyne, and City wasted a number of opportunities to increase the lead before halftime — with Phil Foden often the culprit.

The third goal came when a weaving run by Jesus was stopped by a challenge by Newcastle midfielder Matt Ritchie, and the ball flicked the chest of Fernandez and looped into the corner of the net.

After curling in his free-kick, Silva still had time to provide another assist for Sterling, who stroked a finish into the corner.

Guardiola gave a rare outing to center back John Stones, who could leave in the offseason after falling out of favour and down the pecking order this season.