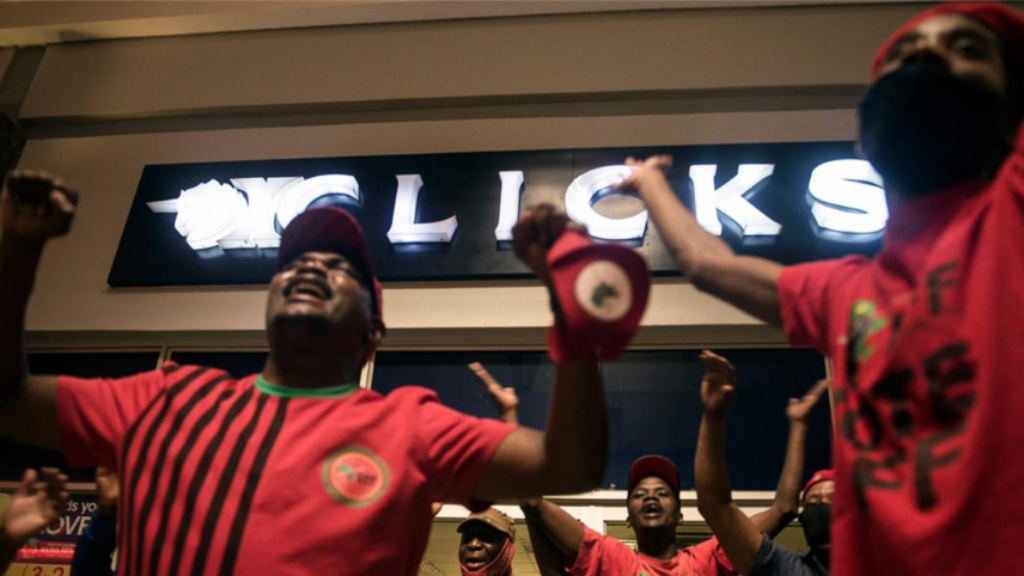 Economic Freedom Fighters (EFF) supporters protest outside a Clicks store in Soweto, Johannesburg, Monday, Sept. 7 2020 calling for the closure of the stores around the country. The chain store posted an advertisement on their website that negatively described natural Black hair labelled as being "Dry and Damaged" and "Frizzy and Dull", while white people's hair was called "Fine and Flat" and "Normal". (AP Photo/Shiraaz Mohamed)

Protests over an advertisement viewed as racially offensive forced the closure Monday of at least 60 outlets of a chain of drugstores.
Leaders of the leftist opposition party Economic Freedom Fighters led the protests against the nationwide retailer Clicks, in which some of its supporters vandalized some stores.

It sparked outrage on social media, with people accusing the retailer of racism and insensitivity toward Black people’s identity.

The Economic Freedom Fighters will not let the company return to normal operations until it takes specific measures to rid itself of racism, said the militant party's deputy president Floyd Shibambu, who led the protest at the Clicks store in Johannesburg's posh Sandton suburb.

The company must disclose the names of all people involved in commissioning the advertisement and the name of the company which produced it and provide evidence that Clicks has taken action against them.

“Unless they do that Clicks will not be open in all parts of South Africa," said Shivambu to The Associated Press at the demonstration.

“We are not going to agree to allow racist institutions to be allowed to continue existing as if nothing is wrong,” said Shivambu.

The company has since issued an apology to the public and said it had suspended two junior employees who were involved in producing and publishing the advertisement.

“I understand the emotions that are coming through from society, from Black people, from our staff ... When I looked at those images it took me two seconds to realize how insensitive they were. I don’t know why we posted them,” Clicks CEO Vikesh Ramsunder told radio station CapeTalk on Monday.

The government issued a statement over the issue.
“Whilst we are equally disturbed by the crude racist display by the advertisement in question, the acts of the lawlessness of vandalizing and burning down Clicks stores that have been reported today are concerning and go against the spirit of peace and respect for human rights that has shaped this country since the dawn of democracy. Engaging in lawless behaviour is not a responsible way to resolve conflict," said the statement issued by the Government Communication and Information System.

“We remain committed to the values of democracy. Any form of discrimination or violation of human rights for whatever reason cannot be tolerated as it undermines the progress made in building a united democratic country,” Minister in the Presidency, Jackson Mthembu said in the statement.

Mthembu noted that in March 2019, the Cabinet approved the National Action Plan to Combat Racism, Racial Discrimination, Xenophobia and Related Intolerance, which he said a empowers the government to act against such injustices.

“Even in the face of resistance by a small minority, we continue with efforts to build a united South Africa that we can all be proud of," Mthembu said. "As we launch Heritage Month, we are reminded of the many cultures, traditions and languages that make us who we are. In the spirit of social cohesion, let us all cherish and respect one another regardless of colour, background, gender and religion.”

Antonio on racism: We need to amplify our voices & raise awareness