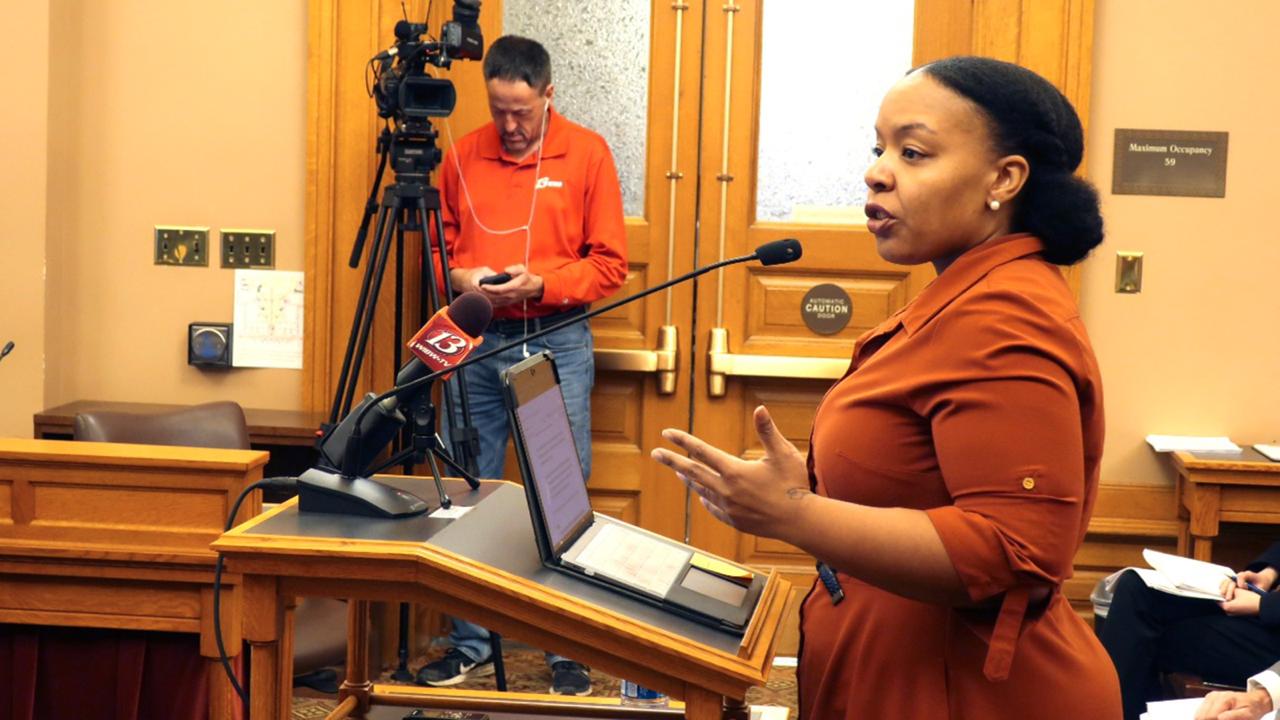 In this Jan. 28, 2020, file photo, Michele Watley, founder of Shirley's Kitchen Cabinet, testifies in favor of a bill before the Kansas Legislature to ban discrimination based on hairstyles in employment, housing and public accommodations during a committee hearing at the Statehouse in Topeka, Kansas. (AP Photo/John Hanna, File)

A growing number of states are facing pressure to ban race-based discrimination against hair texture and hairstyles in schools and the workplace.

Advocates this week presented a draft proposal to New Mexico state lawmakers that would outlaw employers and schools from discriminating against Black and Native American women’s hairstyles. It's the latest state targeted by a national campaign.

Devont’e Kurt Watson, a member of Black Lives Matter in Albuquerque, told New Mexico lawmakers on Monday that the state should amend its Human Rights law to protect people with Afros, cornrows, dreadlocks and headwraps. The state should also provide protections for Native Americans who face hair discrimination, he said.

“Passing the (the proposal) in New Mexico will have far-reaching implications to protect our diverse community from egregious acts of hatred,” Watson said. “Hair discrimination is racial discrimination.”

“Hair discrimination for people of colour in New Mexico is real,” Brooks said.
The draft evaluated by a New Mexico legislative interim committee was the first step for a bill that is expected to be introduced in January. New Mexico's Legislature is dominated by Democrats and the state has a Democratic governor.

Earlier this year, Democratic Washington Gov. Jay Inslee signed a bill that made Washington the latest state to pass a version of the CROWN Act.

It stands for “Create a Respectful and Open World for Natural Hair” and is part of a national campaign promoted by Dove, the National Urban League, Color Of Change and Western Center on Law and Poverty.

California, Colorado, Maryland, New York, New Jersey, and Virginia have already passed similar laws, according to people involved in the campaign. Other states, such as Connecticut, have considered similar proposals but they have not passed.

Earlier this year, the American Civil Liberties Union of New Mexico sued the state’s largest school district and a former teacher over a 2018 episode where the teacher allegedly cut a Native American student’s hair during class on Halloween and asked another student if she was dressed as a “bloody Indian.”

The ACLU’s complaint against Albuquerque Public Schools and the former teacher, Mary Jane Eastin, claims she created a hostile learning environment and discriminated against McKenzie Johnson, who is Navajo.

The school district’s superintendent issued a public apology after the allegations emerged and told parents that Eastin would not return to Cibola High School, where she taught English.

School officials declined to comment on the lawsuit. Eastin's attorney, Barry Berenberg, did not immediately respond to an email Tuesday seeking comment.

Racism in the Caribbean: Children feel its sting too

One on One: Premier Burt talks COVID-19, hurricane season & racism