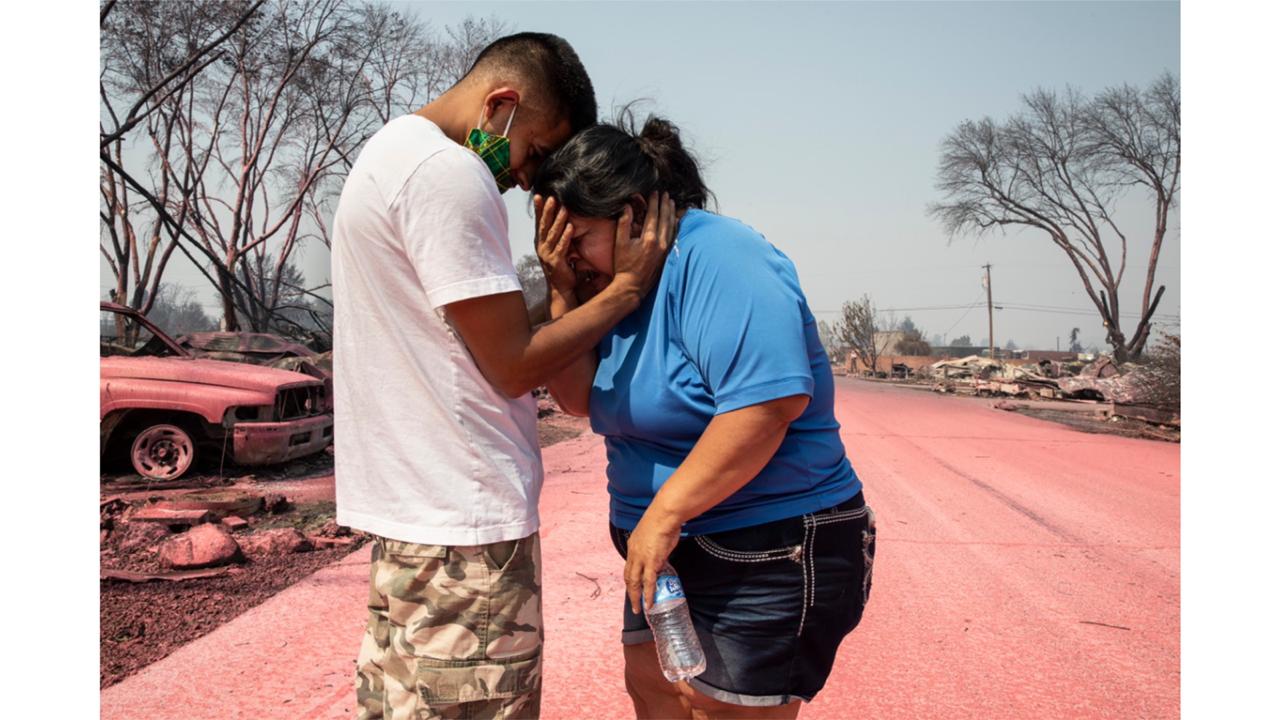 Stunned residents of the small Oregon town of Phoenix walked through a scene of devastation Thursday after one of the state's many wildfires wiped out much of their community, including a mobile home park, houses and businesses.

But even as residents in southern Oregon near the California border were assessing their losses, other wildfires in the northwest part of the state were growing, with more people told to flee for their lives.

By Thursday evening, the number of people evacuated statewide because of fires had climbed to an estimated 500,000, the Oregon Office of Emergency Management reported. That's more than 10% of the state's 4.2 million population.

A fire approaching Molalla triggered a mandatory evacuation order for the community of about 9,000 people 30 miles (48 kilometres) south of Portland. A women's prison less than a mile from Interstate 5 in Portland's southern suburbs was being evacuated “out of an abundance of caution,” the Oregon Department of Corrections said.

Some firefighters in Clackamas County, which includes Molalla, had been told to disengage because of dangerous fire activity as two large fires in the area were believed to be merging, according to the state fire marshal’s office.

After spending the night in their cars in a Home Depot parking lot on the outskirts of Phoenix, a stream of people walked into what was left of the town that hugs Interstate 5. They hauled wagons and carried backpacks and bags to salvage whatever they could.

Jonathan Weir defied evacuation orders as flames 30 feet (9 meters) high shot from the trees. He drove his car to the entrance of a nearby mobile home park, where his tires began melting. His home was destroyed as the fire hopscotched through the town of 4,000 residents.

The Federal Emergency Management Agency estimated that 600 homes were burned by the fire that started in Ashland and tore through Phoenix, the Mail Tribune of Medford, Oregon, reported.

At least 16 people have died in the wildfires across Oregon, Washington state and California, where hot, dry and windy weather combined to create near-perfect conditions for flames.

The small farming town of Malden in eastern Washington was mostly destroyed, losing its fire station, post office, city hall and library. In California, thousands of homes were threatened Thursday after winds whipped ablaze into a monster that incinerated houses in a small mountain community and killed at least three people.

Experts say the California fires are growing bigger and moving faster than ever before.

Oregon officials were shocked by the number of simultaneous fires, which stood at 39 on Thursday morning, according to the state Office of Emergency Management.

Gov. Kate Brown said more than 900,000 acres (364,000 hectares) — greater than the size of Rhode Island — have burned across the state in the past three days — nearly double the territory that burns in a typical year. She told a news conference that the exact number of fatalities was not yet known. More than 80,000 people have fled their homes, Brown tweeted.

“We have never seen this amount of uncontained fire across the state,” Brown said.

Back in Phoenix, Jerry Walker fled in his pyjamas and only had time to grab some cash. He did not know if his apartment complex survived.

“I’ve never seen devastation like this ever in my life," Walker said. "I don’t know how we’re going on to recover.”

Phoenix City Councilman Al Muelhoefer said the north end of the town was gone but he had heard of no fatalities.

At least three people in Oregon were reported killed, including a boy and his grandmother, and several others critically burned. Deaths in Washington included a 1-year-old boy.

Elsewhere, wildfires damaged towns in a canyon and the foothills of the Cascade Range, where the remains of a boy and his dog were found. Flames also hit the coastal town of Lincoln City and Estacada, 30 miles (48 kilometres) southeast of Portland.

Fires also erupted along I-5, forcing a shutdown Wednesday of the main freeway along the West Coast. U.S. Highway 101, the main coastal highway running through California, Oregon and Washington, was affected too.

Evacuees poured into the state fairgrounds in Salem, many bringing their animals.

Assisted by neighbours and strangers, Catherine Shields evacuated her home in Silverton with a menagerie of animals. As smoke obscured the sun and ash fell from the sky, the group helped load three horses, a donkey, two llamas, a dozen sheep, geese, ducks, turkeys and dogs into trailers and vehicles.

She marvelled at how people were pulling together despite the nation's political divisiveness.

“In the last 24 hours, we just felt people are doing their best," Shields said Wednesday as she walked one of the horses at the fairgrounds.

The Jackson County sheriff confirmed at least one death and a criminal investigation at the origin point of a wildfire that started near Ashland, according to the Mail Tribune in Medford.

Lloyd Dean Holland, a Vietnam veteran, barely escaped his home in Estacada on Tuesday night. He left his rental house as flames exploded in cedar trees around him. He said his sole remaining possessions — his dog, rifles, dentures and some clothing — were all in the truck he used to flee.

“I’ve been through hell and high water but nothing like this. I’ve been shot down and shot at but this — last night — I’m still not over it,” Holland said.
Back in Phoenix, Marty Curtis was luckier. Her house was spared. She escaped with her cat, Louie.

“You could see the flames. You could hear things popping — gas tanks and propane tanks exploding,” she said. “I have my house. I have my life. I have my cat and I have my job — and right now, that’s all I need.”

California firefighters `taxed to the limit' and in need of help