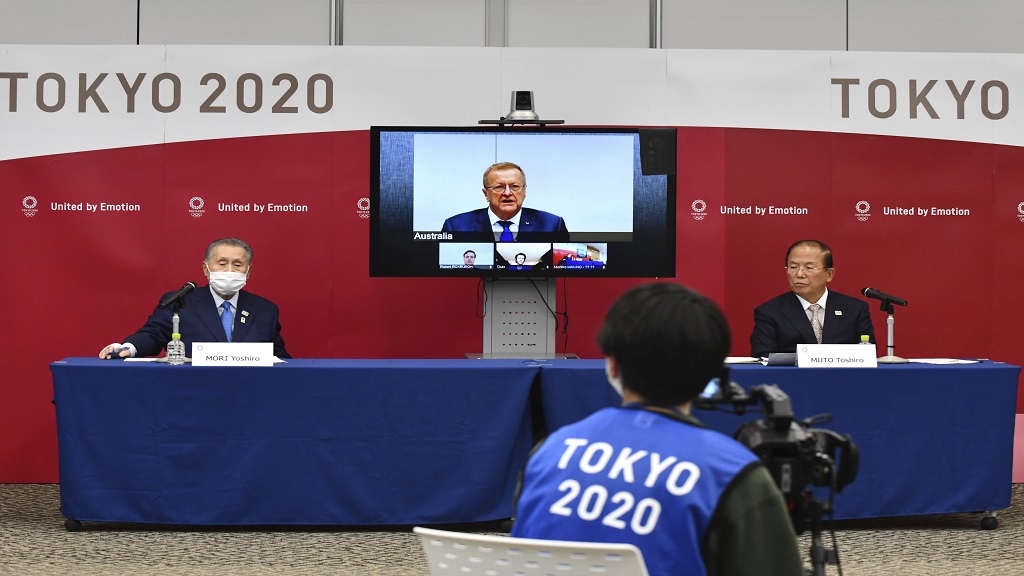 Tokyo 2020 Organising Committee President Yoshiro Mori, left, and CEO Toshiro Muto, right, attend teleconference with International Olympic Committee member John Coates, who heads the inspection team for Tokyo Olympics, in Tokyo Thursday, April 16, 2020. Tokyo Olympic organizers and the IOC said Thursday they will cut some of the extras out of next year’s postponed games, an attempt to limit what is expected to be billions of dollars in added expenses.(Kazuhiro Nogi/Pool Photo via AP).

Japan has been devastated like many countries by the coronavirus pandemic and could be in a recession when the Olympics are to open on July 23, 2021.

“These games are a very positive opportunity for an economic stimulus," Coates said in a teleconference on Thursday with the Tokyo organising committee. “These games can help kick start the economy again. These games could be the rebirth of the tourism industry."

But economists and Olympic researchers contacted by The Associated Press on Friday said any economic boost will be negligible given the size of Japan’s $5 trillion economy and the limited tourism and economic benefits from the 17-day games.

In some previous Olympics, soaring prices and crowding have discouraged tourists instead of attracting them.

“His predictions fly in the face of all the research on the financial impacts of hosting the games ‘on a good day’ — and the current global crisis does not qualify as ‘a good day,'” Helen Lenskyj, a professor emerita at the University of Toronto, said in an email.

Lenskyj has written eight books on the Olympics, including her most recent — “The Olympic Games: A Critical Approach." She suggested Japan would be better off if it did not have to finance next year's games.

“At this moment in history, ‘a very smart man’ would be wishing his country did not have the added burden of hosting the Olympics,” Lenskyj said.

Japan is officially spending $12.6 billion to organise the Olympics, although a government audit report in December said it was twice that much. All but $5.6 billion is taxpayer money.

IOC and Japanese officials say they don't know the cost of the one-year delay, but estimates have put it at $2 billion to $6 billion. Nearly all of the added costs fall to Japan under an agreement signed in 2013 when Tokyo was awarded the games.

Coates confirmed the IOC would be spending “several hundred million dollars” because of the postponement. The funds will go to distressed international federations and national Olympic committees, and not to Tokyo.

Tokyo organising committee CEO Toshiro Muto has described the added costs as “massive” and Coates acknowledged “there will be some negative impacts.”

“If Tokyo is hoping that a surge of tourism is going to cover the costs of moving the games by a year, they are likely to be very disappointed,” Victor Matheson, a sports economist at the College of the Holy Cross, said in an email.

Matheson and colleague Robert Baumann calculated the impact of foreign tourism on the 2016 Rio de Janeiro Olympics. They discounted local spending since it was simply moving expenditures from one place in the country to another.

Rio spent about $13 billion to organise the Olympics, and some put the figure at $20 billion.

Matheson and Robert Baade of Lake Forest College published a study in 2016 titled "Going for Gold: The Economics of the Olympics." They looked at the impact of short-term and long-term tourism, sports and other infrastructure, employment, trade and the intangible “feel-good factor” of holding the Olympics.

They concluded “in most cases the Olympics are a money-losing proposition for host cities; they result in positive net benefits only under very specific and unusual circumstances.”

The IOC and Japanese organisers on Thursday promised to cut out frills to rein in spending. They are still trying to nail down if all of the 43 Olympic and Paralympic venues will be available next year, and at what cost.

“On the Japanese side they are assessing the impact of the postponement, including costs," Coates said. “These are not matters that are going to happen quickly. I couldn’t put a finger on when the additional costs will be assessed and done.”

Tokyo has no 'Plan B' for another Olympic postponement