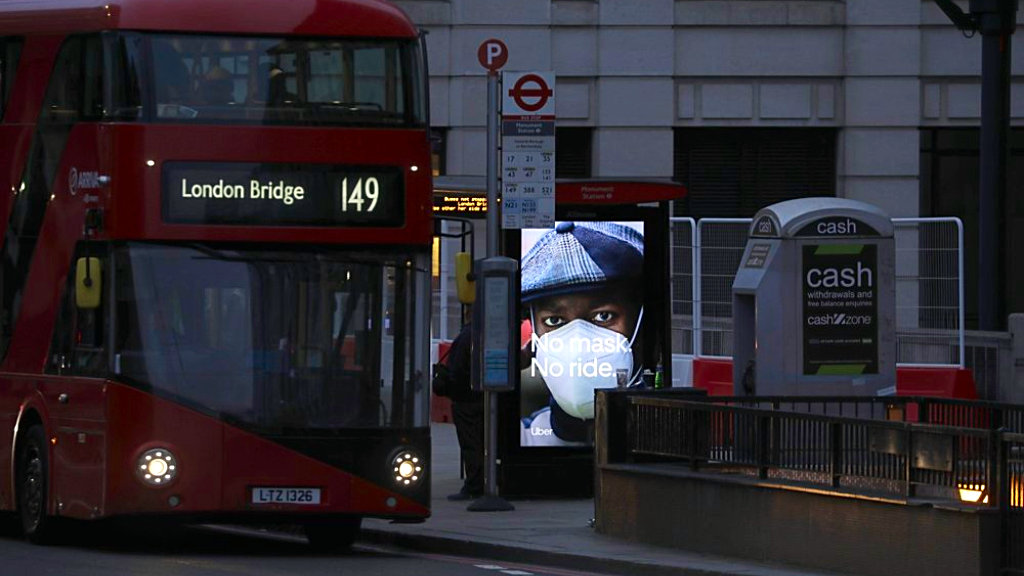 An Uber advert saying "No mask. No ride." is displayed at a bus stop on London Bridge before the morning daylight rose in London, Monday, Oct. 12, 2020. In response to the coronavirus' resurgence, British Prime Minister Boris Johnson is expected to announce in Parliament on Monday a three-tier local lockdown system, formally known as "Local COVID Alert Levels," for England, his office said. (AP Photo/Matt Dunham)

The British government is set to announce new restrictions Monday on business and socializing in major northern England cities with high infection rates. But pubs, restaurants and other businesses are pushing back, arguing that they are not to blame for a resurgent outbreak.

Local authorities in hard-hit cities including Liverpool and Manchester are seeking financial support for businesses that are ordered to close, and details of an exit strategy from local lockdowns.

After falling in the summer, coronavirus cases are on the rise in the UK as winter approaches, with northwest and northeast England seeing the steepest increases.

Under the new measures, areas of England will be placed in "tiers," classing them as at medium, high or very high risk, and placed under restrictions of varying severity.

Liverpool mayor Steve Rotheram said his city was to be placed in the highest category.

Rotheram, mayor of the greater Liverpool region in northwest England, said local officials have not yet agreed with Prime Minister Boris Johnson's Conservative government what the exact restrictions will be. Johnson is due to give more details in the House of Commons later.

Businesses including gyms and pubs are expected to be shut, but restaurants are lobbying to be allowed to remain open. Rotheram said cities also wanted to know what the exit strategy would be from the measures, which are set to be reviewed after a month.

The UK has experienced Europe's deadliest outbreak, with an official death toll of 42,825. Health officials say Britain is at a tipping point in the outbreak, with strong action needed to prevent hospitals being overwhelmed at a time of year when they are already at their busiest with flu and other winter illnesses.

Stephen Powis, medical director of the National Health Service in England, said there are currently more people hospitalized with the virus than there were when the country went into lockdown in March.

He said three temporary COVID-19 hospitals in northern England that were mothballed when the outbreak receded over the summer were being readied to admit patients once again in the coming weeks.

England's deputy chief medical officer, Jonathan Van-Tam, said Monday that while northern England has the highest infection rates, cases are on the rise across the country.

"The epidemic this time has clearly picked up pace in the north of England earlier than it did in the first wave and that almost certainly relates to the fact the disease levels in the north, and certainly in the northwest, never dropped as far in the summer as they did in the south," Van-Tam told a news conference.

But, he added: "This is a nationwide phenomenon now."

Liverpool has one of the country's highest levels of infection, with more than 600 cases per 100,000 people.

Bar and restaurant owners have questioned whether they are major sources of transmission, and say the government has not shared the evidence to back up the claim.

Manchester City Council leader Richard Leese said data from the city's public health officials "seems to demonstrate that there is not a particular connection between bars and restaurants and the transmission of COVID."

But Calum Semple, professor of outbreak medicine at the University of Liverpool and a member of the government's Scientific Advisory Group for Emergencies, said "most of the outbreaks are happening within and between households and then after that, it's in the retail and hospitality sector."

"Alcohol and people's behaviour are well known to be factors that result in relaxation of one's adherence to regulations, let's put it politely," Semple told the BBC. "And so I can understand why this move is happening."

The government has announced a support package to pay two-thirds of the salaries of employees of companies that are told to close, but many in the pub and restaurant sector say that is not enough to save already struggling businesses.

England is already under national restrictions including a 10 p.m. curfew on pubs and restaurants and a ban on more than six people gathering. Some areas have tougher measures, such as a ban on households mixing.

The rest of the UK is under similar, and sometimes tougher, restrictions. In Scotland's two biggest cities, Glasgow and Edinburgh, pubs have been closed for 16 days to suppress the outbreak.

WHO: 10 per cent of world's people may have been infected with virus