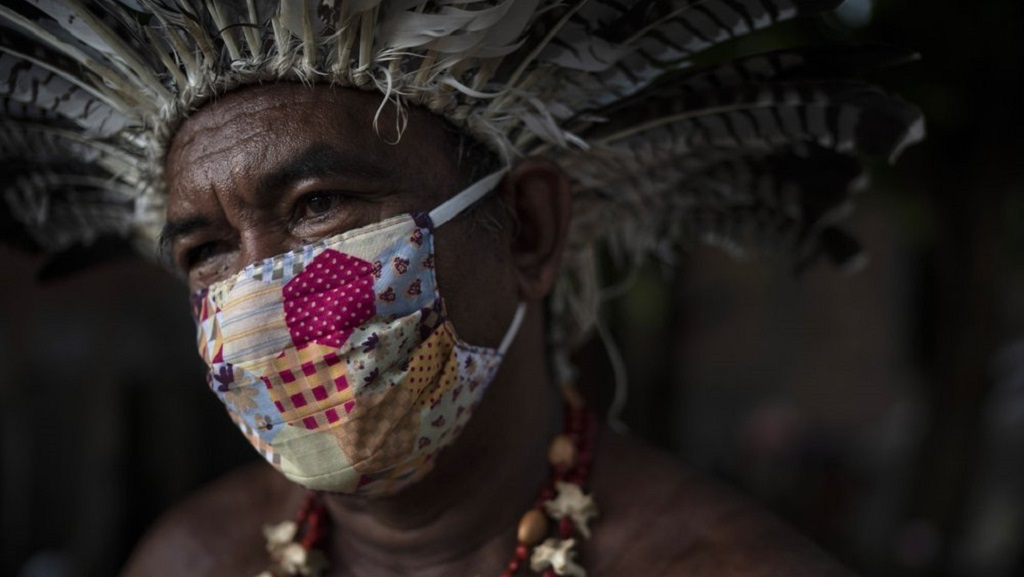 In this May 10, 2020 photo, Pedro dos Santos, the leader of a community named Park of Indigenous Nations, poses for a photo, in Manaus, Brazil. Manaus' lack of the new coronavirus treatment prompted Pedro dos Santos to drink tea made of chicory root, garlic and lime to combat a high fever that lasted 10 days. (AP Photo/Felipe Dana)

In the remote Amazon community of Betania, Tikuna tribe members suspect the coronavirus arrived this month after some returned from a two-hour boat trip down the Solimoes River to pick up their government benefit payments.

Dozens subsequently got headaches, fevers and coughs. Two died. And the five government medical workers for the community of about 4,000 are not treating the sick because they lack protective equipment and coronavirus tests, said Sinésio Tikuna, a village leader.

So the Tikuna rely on their traditional remedy for respiratory ailments: Inhaling clouds of smoke from burning medicinal plants and beehives.

The Tikuna's plight illustrates the danger from the coronavirus as it spreads to rainforest areas where tribe members live in close quarters with limited medical services. Most are reachable only by boat or small aircraft. 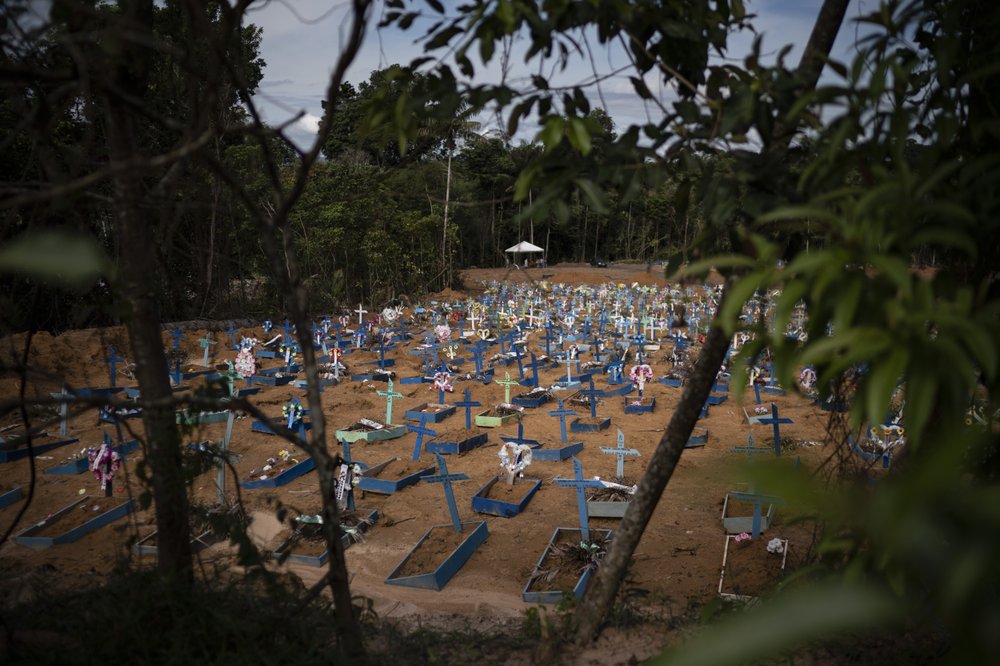 (Photo: In this May 11, 2020 photo, graves for people who have died in the past month fill a new section of the Nossa Senhora Aparecida cemetery, amid the new coronavirus pandemic, in Manaus, Brazil. Indigenous tribes dwelling up the Solimoes and Negro rivers that merge in Manaus to form the Amazon River tried for weeks to seal their reserves off from the virus, pleading for donations while awaiting government delivery of food assistance so they could remain isolated. It didn't come for many, indigenous advocates said. (AP Photo/Felipe Dana)

Brazil has Latin America's highest COVID-19 death toll, with more than 15,000 as of Sunday. The country's hardest hit major city per capita is in the Amazon — Manaus, where mass graves are filling up with bodies.

As Sinésio Tikuna described in an interview his belief that beehive smoke saved four sick tribe members, there was no one at a Manaus hospital to help a feverish woman, struggling to breathe, make it inside the emergency room. A police officer put her on a gurney, wheeling it inside with an Associated Press photographer's help.

The indigenous people dwelling up the Solimoes and Negro rivers that merge in Manaus to form the Amazon River tried for weeks to seal their reserves off from the virus, pleading for donations while awaiting government deliveries of food so they could remain isolated.

It didn't come for many, indigenous advocates said.

The Upper Solimoes basin has 44 tribal reserves and has emerged as the Brazilian Amazon's indigenous infection hotspot.

Testing is extremely limited, but shows that at least 162 of the area's approximately 76,000 indigenous people have been infected and 11 have died.

There are more than 2,000 confirmed infections in parts of the area not overseen by the government's indigenous health care provider.

In a Tikuna village named Umariacu near the border with Peru and Colombia, the first three COVID-19 deaths were elderly tribe members infected by younger members who left town to receive government welfare payments and trade fish and produce for chicken and other food, said Weydson Pereira, who coordinates the region's indigenous government health care.

"Our biggest anguish today is the indigenous people who aren't staying in their communities and coming in and out of town. Today the safest place for them is inside their villages," Pereira said this month, infected and isolating at home with his infected wife and daughter.

Two weeks of tribal quarantine for the region would have provided time to identify and isolate cases, but "unfortunately, that hasn't happened," he said. 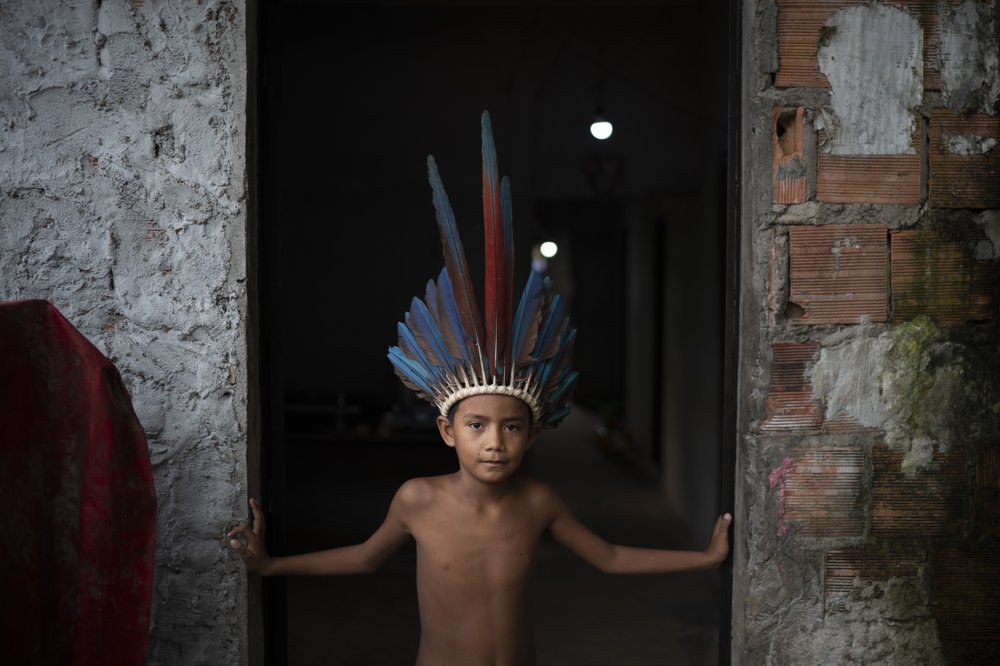 (Photo: In this May 10, 2020 photo, 9-year-old Pedro Henrique poses for a photo standing in the entrance of his home at the Park of Indigenous Nations community in Manaus, Brazil, amid the new coronavirus pandemic. Some frightened residents of Manaus are fleeing but they may be asymptomatic and could spread the virus elsewhere, said the executive director of Brazil’s Institute for Health Policy Studies. (AP Photo/Felipe Dana)

In the same area, people of Kokama ethnicity have been unable to get medical treatment from health system in the small city of Tabatinga or from the government's indigenous care provider, federal prosecutors said in a lawsuit filed this week seeking to expand Tabatinga's hospital.

That hospital's 10 ventilators are in use for coronavirus patients and the nearest intensive care is 1,000 miles (1,600 kilometres) downriver in Manaus, also filled with patients, Pereira said.

Manaus' lack of coronavirus treatment prompted Pedro dos Santos, the leader of a slum named Park of Indigenous Nations, to drink tea made of chicory root, garlic and lime to combat a high fever that lasted 10 days. A 62-year-old neighbour of Bare indigenous ethnicity needed an ICU bed, but none were available and he died, said the man's son, Josué Paulino.

Some frightened residents of Manaus, population 2.2 million, are fleeing but they may be asymptomatic carriers and could spread the virus elsewhere, said Miguel Lago, executive director of Brazil's Institute for Health Policy Studies, which advises public health officials.

About 575 miles (925 kilometers) up the Negro River from Manaus is the community of Sao Gabriel Cachoeira, where people of 23 indigenous ethnicities make up more than 75 percent of the population.

About 46,000 live in the urban area and on rural reserves with frequent back-and-forth transit, said Juliana Radler, an advisor for the Socio-Environmental Institut, an environmental and indigenous advocacy group.

Sao Gabriel Cachoeira quickly reacted to the COVID-19 threat within a week of the World Health Organization's pandemic declaration by cutting off riverboat and plane arrivals in late March — except for essential goods and soldiers.

But Radler said some Sao Gabriel Cachoeira residents stuck in Manaus headed home on supply ships — disembarking nearby and sneaking into town under cover of darkness. About 150 others made the voyage on a triple-decker ferry named the Lady Luiza.

When it arrived days later, authorities tried but failed to turn passengers away. No quarantine areas were available and some ferry passengers may have brought the virus to Sao Gabriel Cachoeira, Radler said.

Brazil's Navy authorized the ferry's trip and passengers were desperate to go home because "they felt exposed and vulnerable" in Manaus, the Lady Luiza's owner said on Facebook.

By mid-April, many residents had what they believed was a strong flu. The community's COVID-19 committee used radio broadcasts, sound trucks and pamphlets to issue warnings about the virus in Portuguese and indigenous languages including Tukano, Nheengatu and Baniwa.

One of the first confirmed coronavirus cases was a teacher of Baniwa ethnicity who died after being taken to Manaus for treatment. For most people COVID-19 causes moderate symptoms like fever, but it can result in death.

As of this week, Sao Gabriel Cachoeira had 292 confirmed infections and nearby indigenous reserves had registered their first cases.

All six functioning ventilators in the hospital were in use and remote tribal health centres were short of supplies, Radler said.

"We need a field hospital as fast as possible, in the next 20 days," she said. "If not, it will be a catastrophe, a true catastrophe."

China announces $2 billion in virus help at WHO assembly

EU: Possible virus drug approval 'before the summer' in early 2021