Virus spreads to over 60 countries; France closes the Louvre 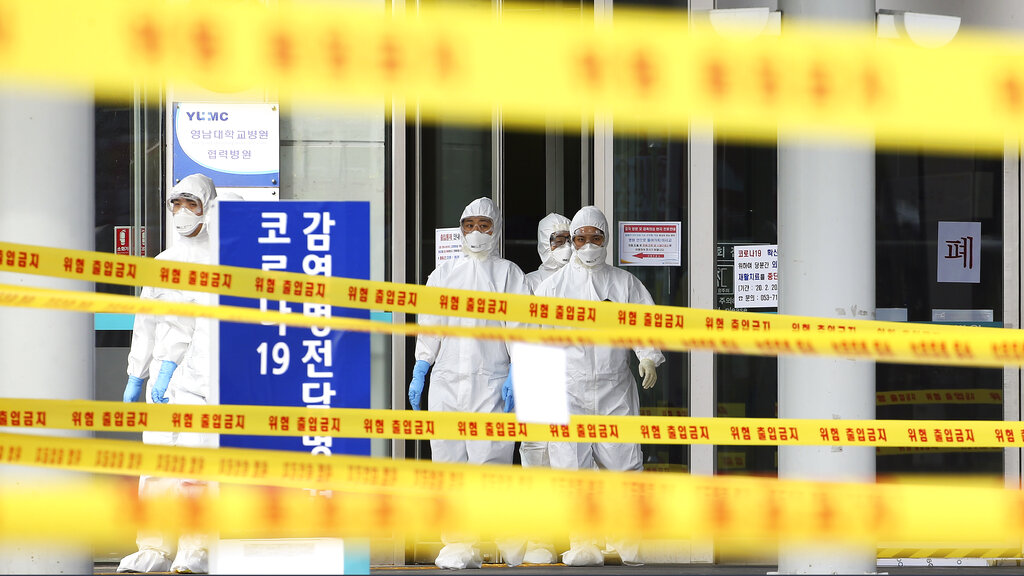 The number of countries hit by the coronavirus climbed past 60 Sunday, and infections and deaths continued to mount around the globe, emptying streets of tourists and workers, shaking economies and rewriting the realities of daily life.

In Paris, the Louvre Museum closed, and priests stopped placing sacramental bread in worshippers' mouths. Panic-buying of daily necessities emerged in Japan. Tourist sites across Asia, Europe and the Mideast were deserted. And governments closed schools and banned big gatherings.

Australia and Thailand reported their first deaths Sunday, while the Dominican Republic and the Czech Republic recorded their first cases. Iran, Iraq, Italy and South Korea, among other places, saw the number of infections rise.

More than 87,000 people worldwide have been infected, and nearly 3000 have died.

The United States on Saturday recorded its first death, a man in his 50s in Washington state who had underlying health problems but who hadn’t travelled to any affected areas.

"Additional cases in the United States are likely, but healthy individuals should be able to fully recover,” President Donald Trump said at a Saturday briefing, where officials announced heightened warnings about travel to certain regions of Italy and South Korea as well as a ban on travel to Iran.

China, where the outbreak began two months ago, on Sunday reported a slight uptick in new cases over the past 24 hours to 573, the first time in five days that the number exceeded 500. They remain almost entirely confined to the hardest-hit province of Hubei and its capital, Wuhan.

South Korea reported 210 additional cases and two more deaths from the virus, raising its totals to 3736 cases and 20 fatalities. South Korea has the second-largest number of infections outside, with most of the cases in the southeastern city of Daegu and nearby areas.

South Korea's president used a speech marking the 101st anniversary of an anti-Japanese independence uprising to call for national unity to overcome the crisis.

Iran's death toll from COVID-19, the disease the virus causes, climbed to 54 as the number of confirmed cases jumped overnight by more than half, to 978 people. The new figures represent 11 more deaths than reported on Saturday and 385 new cases.

Iraq's Health Ministry announced the discovery of six more cases Sunday, raising the total to 19 — all Iran-linked. The outbreak in Iran has prompted its neighbours to seal their borders to Iranians, while other Gulf states have halted flights to Iran.

Many cases of the virus have been relatively mild, and some of those infected apparently show no symptoms at all. That can allow for easier spread.

Worries are mounting that prolonged quarantines, supply chain disruptions and a sharp reduction in tourism and business travel could weaken the global economy and even cause a recession. That has sent stocks plummetting, with Wall Street suffering its worst week since the 2008 financial crisis.

In the Czech Republic, three cases were reported, including a US citizen who has been studying in Milan and had travelled to the Czech Republic on a tourist trip. The others were Czech citizens who had returned from Italy. The person who fell ill in the Dominican Republic was an Italian citizen and marks the first case in the Caribbean.

British health authorities said the number of people confirmed as infected rose by 12, bringing the country's tally to 35, with one death. Most of the new cases involved people who had been in Italy or Iran, both countries hit hard by the outbreak.

The government's chief medical officer, Chris Whitty, said one of the new patients “had no relevant travel and it is not yet clear whether they contracted it directly or indirectly from an individual who had recently returned from abroad.” Whitty said the investigation is continuing.

Islam's holiest sites have been closed to foreign pilgrims, while professional baseball teams have played in deserted stadiums in Japan. Officials in France advised people to forgo the customary kisses on the cheek upon greeting others.

The archbishop of Paris told parish priests to put the Communion bread in worshippers' hands, not in their mouths.

The Louvre closed after workers who guard its trove of priceless artworks expressed fear of being contaminated by the stream of visitors from around the world.

“We are very worried because we have visitors from everywhere,” said Andre Sacristin, a Louvre employee and union representative. “The risk is very, very, very great." While there are no known infections among the museum's 2300 workers, “it’s only a question of time,” he said.

The shutdown followed a government decision Saturday to ban indoor public gatherings of more than 5000 people.