WADA to consider sanctions if US holds funding 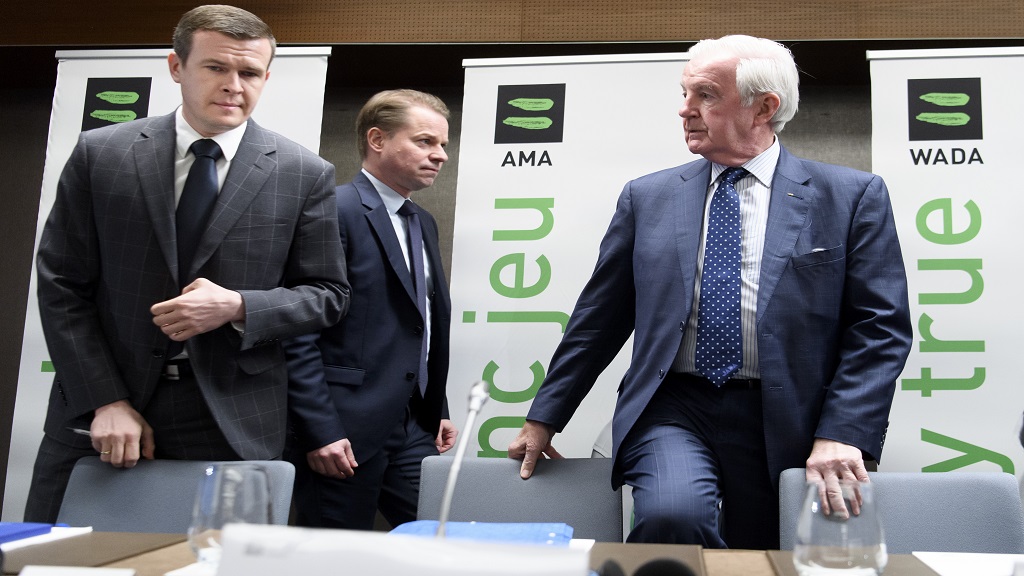 In this Dec. 9, 2019, file photo, Witold Banka, left, president-elect of World Anti-Doping Agency; Craig Reedle, right, WADA then-president; and Olivier Niggli, centre, director general, arrive for a news conference in Lausanne, Switzerland. The World Anti-Doping Agency will consider rules changes that would allow it to sanction the United States if it stops paying its annual dues to the drug-fighting organisation. (Laurent Gillieron/Keystone via AP, File).

The World Anti-Doping Agency (WADA) will consider rules changes that would allow it to sanction the United States if the country stops paying its annual dues to the drug-fighting organisation.

WADA said in a news release Friday that “several representatives” of governments around the world had approached the agency with the idea.

“This matter has been raised by some concerned Governments, not by WADA’s leadership, and as is the case with any proposal raised by a stakeholder, WADA has an obligation to consider it carefully,” president Witold Banka said.

This episode stems from a US government study in June that concluded the US is underrepresented on WADA’s key policy-making committees, and that Congress should consider giving the American government's drug-fighting office discretion to withhold future funding. Underlying the problems, the study said, was that WADA has not moved urgently enough to reform itself in the wake of the long-running Russian doping scandal.

WADA's executive committee meets September 14-15. The Associated Press asked director general Olivier Niggli to identify the governments that came to WADA with the concerns. He said he could not divulge the governments “and frankly it does not matter. The point is that it is a legitimate concern that needs to be discussed.”

“There is something seriously wrong when WADA attacks one of its key partners that is doing everything to uphold the rules — yet they turn a blind eye to a country like Russia that runs a state-sponsored doping program,” Tygart said.

WADA's annual budget of $37.4 million is funded half by governments across the world and half by the International Olympic Committee (IOC). The US gave $2.7 million to WADA this year, which was more than double the amount of all but two of the nearly 200 countries that are WADA signatories.

The funding threat has been hanging over other issues that reached a boiling point over the past week, most notably Russia's decision to fire the head of its anti-doping agency, which was revamped in the wake of a doping scandal that has lingered over international sports for more than six years. WADA said it was “extremely concerned” about the decision, while other countries singled out the firing as another example of a sanctioning process that did not fundamentally change the country's outlook on anti-doping issues.

Also this week, a group of 18 nations' anti-doping agencies met and reiterated their concerns about a number of WADA issues, including what they say are needed reforms that would give WADA greater autonomy from the international sports movement. Critics believe that WADA lacks true independence because the IOC bankrolls half of its budget and also places its members on key WADA governing committees.

With the anti-doping agencies drafting their own statement Thursday, Banka sent an open letter to athletes that spelled out and largely defended the agency's moves over the past several years. In a turn of phrase used frequently by leaders at the Montreal-based agency, Banka said “I will not allow WADA to get bogged down in these political games." He also said "control of WADA is not for sale, no matter what stakeholder we are dealing with” — an apparent reference to the US government study.

A day later, he was talking about consideration of a rules change that could ultimately jeopardise the United States' role in the anti-doping movement.

“I still stand ready to work with the US Government on this and I am hopeful that it will continue to contribute to the global anti-doping program,” Banka said. “But what our stakeholders are telling us is that this episode has highlighted the need for more commitment and accountability within the clean sport community.”