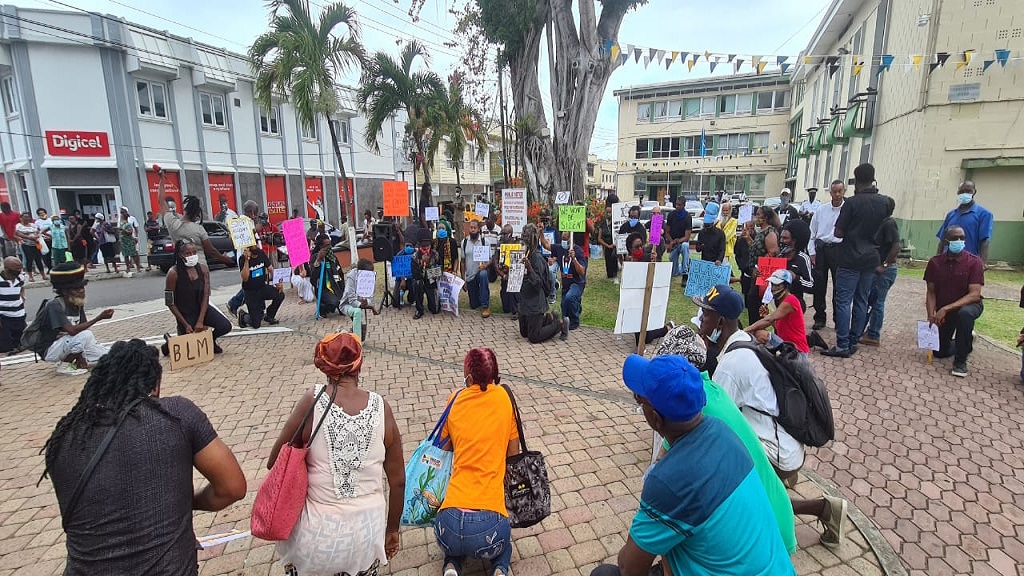 The Black Lives Matter protest went on today at Constitution Park in Castries despite issues concerning permission from authorities.

Among the small crowd of protesters was the very vocal Allison Jean, mother of the late Botham Jean, who was shot in his apartment by a police officer in Dallas, Texas.

In her speech, Mrs Jean urged protestors to stand up and show that their lives matter.

Speaking in creole, Mrs Jean continued saying we cannot breathe in St Lucia when there are persons who were killed and no one has been arrested for the crimes.

The crowd went on to chanting “No justice, no peace”,  “I can’t breathe”  and “Breathe” in unison with Mrs Jean.

Also in attendance was Alix Williams, the aunt of Kimberly Williams De Leon.

The 42-year-old mother of two was shot dead at her Morne Fortune residence the night of Monday, October 29, 2018.

Her husband, a police officer, was questioned in relation to the incident but cleared as a person of interest.

Yesterday, Acting Police Commissioner Milton Desir released a statement explaining why he was not able to approve the protest during the pandemic.

"Nowhere around the world people are getting permission to march," Aaron Alexander declared, adding, "People just march and protest and that's what we did."

Despite the denial of the application by the Royal Saint Lucia Police Force, Alexander said officers did approach the organizer, had discussions and allowed the march to go on for a specific period of time.