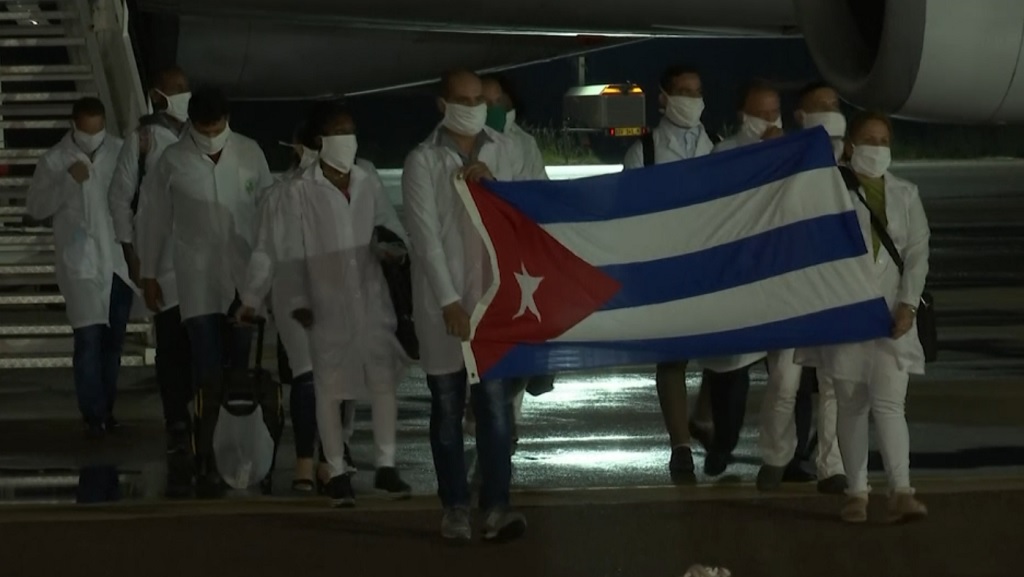 More than 200 doctors from Cuba have arrived in South Africa to help fight the COVID-19 pandemic.

The doctors, including community health and infectious disease specialists, arrived early Monday morning and were welcomed by military and health authorities.

South Africa requested assistance from the Cuban government, which is sending more than 1,000 doctors to 22 countries, including Togo, Cap Verde and Angola in Africa.

South Africa has reported the highest number of confirmed COVID-19 infections in Africa, with at least 4,546 cases and 87 deaths.

Some of the Cuban doctors have been "in the frontline of fighting other outbreaks in the world such as cholera in Haiti in 2010, and Ebola in West Africa in 2013," said South African health minister Zweli Mkhize.

Cuba's government supported the African National Congress in its fight against South Africa's apartheid system of racist minority rule. Now the ANC is South Africa's ruling party and has good relations with Cuba.

The Cuban medical personnel will stay in a two-week quarantine before starting work. They have arrived as South Africa is increasing community testing, especially in poor, crowded neighbourhoods.

In the economic hub of Gauteng province, which includes South Africa's largest city Johannesburg and the capital Pretoria, mass screening and testing is scheduled to take place throughout the week.

The screening and testing will also concentrate on the Western Cape province, which includes the city of Cape Town and which has largest number of COVID-19 cases.

South Africa has conducted nearly 170,000 tests. The country has 28,000 experienced community health workers who track contacts of people who test positive to help contain the spread of the disease.

COVID-19: Cuban nurses coming to T&T to assist in ICU