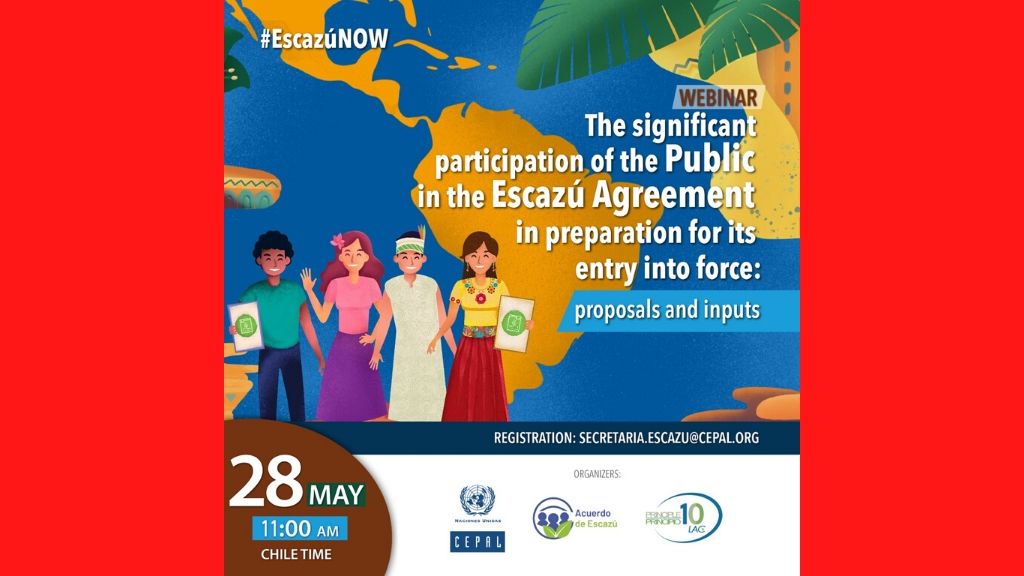 The English version of the webinar will be carried out on Thursday, May 28 at 11 am (Chile Time/Saint Lucia Time). The session will be moderated by Karetta Crooks Charles of the Saint Lucia Nationa Trust and Alternate Elected Representative of the Public (Saint Lucia), while Danielle Andrade, attorney-at-law and Main Elected Representative of the Public (Jamaica) will present on the public’s proposals for the significant participation of the public in the Escazú Agreement.

Nafesha Richardson (23, from Saint Vincent and the Grenadines), the Escazú Youth Champion from the Caribbean will share what she has been doing and her plans to advance the cause in the Caribbean, especially among youth. Escazú Youth Champions, Laura Serna (23, from Colombia) and Nicole Becker (19, from Argentina) will also be sharing their plans at the English webinar. Presiding Officers and government representatives from Saint Vincent and the Grenadines and Costa Rica will also deliver remarks at the webinars.

Persons interested in participating should email secretaria.escazu@cepal.org. The Spanish version was held on March 27.

Visit the following link below to access the presentations and more information: https://www.cepal.org/en/events/webinar-significant-participation-public-escazu-agreement-preparation-its-entry-force.

IDB webinar to focus on family violence during COVID-19 pandemic